How well do you know the 50 states of the USA? Could you name them all? Could you label them? With no borders? Could you Identify them by their state flower, soil, firearm or rock song? This beautiful quiz is designed to get you up to speed on all those state-specific facts and more.

Made by Jrap with assets from Wikimedia Commons

This is really good quality. I made a full world one. I wish I scoped this out because i would've changed a few things. I like this. Audio especially.

I will definitely come back to play again, thank you!  I only tried Vanilla so far, and would like to see the state facts stay on screen longer, maybe until the next mouse click.  When last state is clicked, the fact message is erased almost immediately by the menu.  Lots to learn here if I had time to see it all :)

Comically, this clue is intended to refer to California, as it was another independent state at the time of the mexican-american war and is believed in folklore to have included a lone star in the top corner of bear flag designs early on, as a tribute to its brother Texas! (Though the more I read about this the more tenuous it seems, and folks might have just really liked stars in those days)

I thought it stood for Mexico? Or more accurately their departure from Mexico? 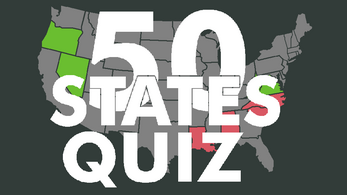